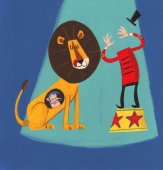 In this photo, who would you say has more competencies, the Lion or the Lion Tamer?  Anyone foolish to enter a lion’s cage without the necessary competencies can probably count on similar results.  Yet why are people hired for positions when they lack the competencies and experience to perform?

An associate of mine that has been in the learning profession longer than I have was trying to assess why he had been passed over for a job and it was given to someone that actually had zero learning background.  As the same thing happened to me recently we decided to talk through what these people had that neither of us did.

Outside of the obvious lack of work experience, I noted that each of the hires were half our age and would not be looking for compensation in the same ballpark we would have been looking to accept.  So we started a list of young and inexpensive as our first two preferred criteria.

Next we went through the remainder of the protected classes list of things that couldn’t be used to discriminate against us, and we saw nothing else.  We then decided to see if young tied together with anything other than lower compensation because both of these businesses still needed to get things done.  At the same time we talked about our working styles because of our experience.

Readers of this blog have learned that I think training should always produce results.  It should never be used as window dressing, or some kind of reward.  If training is warranted it needs to concentrate on skill competencies and how we measure results of our efforts.  We spent some considerable time talking about times when we let things slide and paid the cost of having to retrain people.  Lost revenue and higher expenses were sometimes incurred when we did things outside of proven methodologies.  We laughed about times when we had gone around in circles with management over avoiding ineffective training methods and how many times it became a battle of the wills and who would win the fights.  That’s when my associate said “BINGO!”

We had found another good reason to avoid older experienced people over younger inexperienced workers.  They never argue because their lack of experience prevents a counter argument.  Many leaders today do not want their ideas challenged.  They want people that lack competencies so they lack the ability to push back.  While this is a win for the manager, it is a big loss for the people getting trained and the company as a whole.

In both of the companies that we had been attempting to work for there was no HR role held by an HR professional.  The HR responsibilities were being covered by another individual as part of their overall job.  This means that recruiting was being done by the hiring manager.

I found a company recently that is a franchise of a major chain, and HR is part of the District Manager’s job, along with sales, production, facilities, security etc.  So when I overheard this person telling a General Manager that “we don’t hire old people here because it doesn’t fit our image”  and that “looks are important, so no fat people or ones with crooked teeth either”  I could almost here the cash register ringing.  It will only take one sharp employee to turn them in and the costs could close the doors.  Yet if you don’t hire older people you can avoid knowledge of HR rules too.

Competencies really do matter IF you want to achieve results.  However, if your real goal is to avoid confrontations, control thoughts and methods, competencies actually get in the way.  What would the goals of your hiring methods reveal? 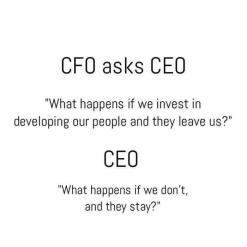 The conversation between this CFO and CEO is meant to describe the conversation about the return on investment in training.  Or is some cases spending the money were the penny pinching CFO comes up against real leadership in the form of the CEO.  While both interpretations are worth learning from, I wonder about the companies that continue the conversation?

So the CFO asks the CEO, “What happens if we invest in developing our people and they leave us?”  To which the CEO replies, “What happens if we don’t and they stay.”  I imagine for some companies, it bounces back again with the CFO saying, “Considering that employee development is not a guarantee we keep or retain people, let’s save the money and see what happens.”  To which the CEO replies, “Okay.”

Now while many of my training friends are swearing at me right now for violating such a sacred quote, how can we explain why some of our companies offer little to no training?  Why is employee development avoided like some kind of plague?  What can be done to get through to management that employee development, when implemented correctly, makes a big difference?

Anyone that knows me, is keenly aware that I beat my head against this wall daily.  I’ve learned that when management is not developing the whole employee, it is usually not a cost consideration, but rather one of the following:

I have on occasion run across the senior manager that has only used training when things have blown up and it becomes part of a fix.  They don’t see training as a proactive function, only reactive.  Sadly there are a lot of training professionals that endorse this thought process in their daily activities.  Hence, why they operate without any kind of training plan or accountability.